Block is a PvP mode in which tees attempt to kill other tees by putting them into freeze tiles. Block is heavily centered around elusive movement and fast reaction times. Block is played on custom maps, with a select few being the most played and most popular.

Many block maps feature a race path leading to a finish line. 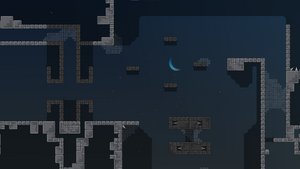 An example of a main block area on a block map

Teeworlds block servers have been in a long-winded state of rivalry, leading to the birth and death of many servers over time. A number of allegations, some evidenced and some not, have been made against various owners in regards to DDoS attacks.

Block, being a heavily PvP centered mode, can harbor toxic attitudes, although this isn't necessarily specific to block.

Block has no single dominant server network - apart from popular servers such as Bombay, block players can be seen on servers like Law Multimap servers and the Multeasymap Playground on DDrace.

TODO: Not sure how factually accurate this is + maybe give some more in depth on the history of block and current block servers
Retrieved from "https://wiki.ddnet.org/index.php?title=Block&oldid=2589"